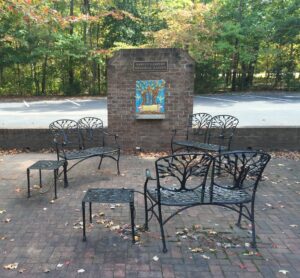 My late husband Harvey and I were among the small group of people approached to explore our interest in creating a second Reform Jewish congregation in Richmond in the summer of 1972.  Before many weeks had passed a steering committee was formed, a number of people had contributed money and Congregation Or Ami (Light of My People) had created the guiding principles of the new congregation.  By the end of  August we had engaged the services of Rabbi Alvin Reines, philosophy professor at Hebrew Union College in Cinicinnati to conduct High Holy Day services at the Jewish Community Center.  And we arranged for Shabbat services to be held bi-weekly at the Friends’ Meeting House on Kensington Avenue in Richmond, to coordinate with the Student Rabbi schedule of Steven Peskind, a senior HUC  student who would come to Richmond every other weekend. Congregants would take turns providing home hospitality for him.  Further, several new “members” prepared a Sunday School curriculum for children to be taught at the JCC.  Congregation Or Ami was on its way.

The excitement of creating this new synagogue was a perfect match for Harvey, a person always optimistic and passionate about something “new and improved.”  Or Ami was to become an important part of our lives.  Our three children were Bat and Bar Mitzvah and confirmed.  Both our daughters were married by our Or Ami Rabbis.  Harvey was an important member of the committee who negotiated  the monies that the State of Virginia would pay when it was decided that our first owned building,  “the house on the hill” was in the direct path of the highway about to be built.  The funds received from the State became the financial foundation for purchasing the land and building our present synagogue on Huguenot Road.  And it was very satisfying to our family when our daughter Lisa was the first bride to walk down the aisle at our beautiful new synagogue in 1989.

When Harvey died suddenly in 1999 I gave a lot of thought to keeping his memory alive as I mourned his loss.  The first year after his death I devoted myself to assembling a scrapbook for each of his five grandchildren, with photographs and memories of their grandfather and his relationship with each of them.  When I explored ideas for honoring his memory beyond our family, Or Ami felt the perfect place.  Since Harvey had become interested in gardening and also was a budding artist whose favorite subject was flowers, creating a lovely outdoor space with a garden in front of Or Ami seemed exactly right.  We invited family members and friends to contribute to the creation of the garden, patio and brick wall.

Over the last almost thirteen years since the memorial garden was completed,  many people who knew him have told me how much they have enjoyed spending a few minutes sitting on one of the benches thinking about Harvey or their own loved ones .  Our family feels fortunate to have been able to provide this lovely memorial to Harvey who is always in our hearts as well.

“The groundbreaking ceremony for the new facility took place on November 9, 1986. Highlighting the festivals was Alan Wurtzel, who drove down from Maryland to tell of the congregation’s formative weeks and its visionary impetus. A series of unseasonable spring deluges delayed the building’s construction, scheduled for late May, 1987, by six months, while the final cost of the new facility climbed to $650,000.

Through all these hardships, somehow inherent in its perpetual struggle, Or Ami prevailed. The building was completed in November and dedicated at a moving Shabbat service on December 11. Undoubtedly, the high point of the Dedication dinner the following night was the fifteen minute video documentary made by professional producer Donald Silverman, whose droll mixture of sublime and humorous memories intensified the family-like atmosphere that is Or Ami. Thanks to a generous donation by the State that netted $113,000, and to another $270,000 from congregational contributions, Or Ami is moving towards a sound and secure future.

A temple, however, is not just a physical edifice. By the same token, building a temple is more than a material achievement for a congregation dedicated to a vision of creative interaction. The newly constructed contemporary facility at 9400 Huguenot Road, with its expandable sanctuary, its exposed beams pointing to the ark, its Eternal Light of pottery, and its multi-purpose classrooms, has cemented Or Ami’s standing as a mature, established synagogue. For whatever reasons, the congregation has replaced some of its cornerstones with newer building blocks. The close association with Alvin Reines has faded into a memory as Or Ami has labored to resolve the day-to-day problems of operation. In place of the dissenting iconoclastic founders who occupied the Judaic counterculture in the 1970s is a utilitarian, accommodating community serving the needs of all of its members, the majority of whom, young parents in their thirties and forties, form a nucleus that promises continuity and longevity.”

~Article from the November 21, 1987 Richmond Times-Dispatch, by Ed Briggs

When Rabbi Aaron Koplin was hired to lead Congregation Or Ami in 1984, the tiny Reform Jewish congregation had two things on its agenda – it wanted to grow and it wanted to get out of the frame house it had long ago outgrown.

Next week, the 150-family congregation, who has grown 50 percent since Rabbi Koplin arrived, will move its furniture into a new contemporary design sanctuary on Huguenot Road adjacent to the Stony Point development.

For the year while the $600,000 synagogue has been under construction, its sign out front heralded that this congregation was not only Reform Jewish, but also liberal Reform Jewish.

“When you look at where our people came from in Richmond, you can tell that they’re coming here for something other than geographic location,” Rabbi Koplin said yesterday. He explained that a third of its members came from the West End, a third from the Fan District, and a third from south of the James River.

Or Ami practices a liturgical style different from its parent synagogue, Congregation Beth Ahaba, where the congregation uses the “Gates of Prayer” liturgy widely used in Reform Judaism.

Influenced by a liberal wing of American Judaism, Or Ami’s services are written by congregational members, using modern representations of ancient symbols.

And their sanctuary – the synagogue’s centerpiece – reflects the way they feel Rabbi Kolpin said.

Exposed beams radiate from the narrow end of the wedged-shaped room, drawing the eye to the ark, the enclosure that hold the Torah, and the eternal light.

Standing in the middle of the carpeted sanctuary, the rabbi said, “It focuses the attention where it should be – on the ark that contains the Torah.”

Another symbol will be the eternal light that traditionally hangs by the ark. It is made from pottery, the same material ancient Jews used to build their eternal lights.

“But this one will have an electric light,” quipped Rabbi Koplin.

A glass wall covers one side of the sanctuary looking out onto a lake and a wooded section by Huguenot Road. Again, Rabbi Koplin said that wall harkens back to the past.

Rabbi Koplin said the energy consultants involved in the building design were surprised when they were presented with the idea of a highly insulated building with a wall of glass.

“Once they realized it was something we had to have, they put them in,” the rabbi said. He added that the glass wall consists of thermal glass to cut down on heating and cooling losses.

In addition to Sunday school classrooms, movable acoustical walls will be installed in several weeks at the rear of the sanctuary for adult education classrooms.

When pulled away, they will open into an area that will seat about 350 people.

“One really for the congregation is that it won’t have to hold holiday services anymore and some other place,” Rabbi Koplin said, referring to the many services and how he functions it was forced to hold in the Jewish Community Center.

A few years after the birth of the congregation in 1972, it bought a large frame house on Huguenot Road for services, congregational functions and office operations.

But, one night during a Purim celebration shortly after Rabbi Koplin arrived, an estimated 90 people showed up. That caused the congregation to seriously consider a plan to relocate.

“We had a great time that night, but half the people were in other rooms and couldn’t see what was going on,” Rabbi Koplin recalled.

The congregations lifesaver came in the form of the state highway department, whose Chippenham extension was destined to go through the house.

Rabbi Koplin said that plan send congregational leaders scurrying to Interplan Architects. They wanted the architects to design a synagogue that would satisfy the congregation’s love of symbols and it style of worship that doesn’t guarantee the chairs will be in the same place from Sabbath to Sabbath.

Property was purchased, the congregation raised $200,000 and the highway department handed over its check that – after expenses and mortgage payoffs – netted Or Ami another $113,000. Next, the leaders obtained a bank loan for the remainder.

“The day after the highway department gave me the check, that frame building was gone,” Rabbi Koplin recalled.

The congregation, dedicated it’s new land on Crystal Night, The day commemorating the Nazi distraction of 70 German synagogues. “It said we’re not defeated and will continue,” the rabbi said.

The synagogue will be dedicated at 8 p.m. Dec. 11 – The Sabbath before the beginning of Hanukkah, the annual festival commemorating the rededication of the Temple in Jerusalem. Rabbi Koplin said, “In our service we will be read dedicating the synagogue and all that it represents.”

He said these days members of Or Ami or so wrapped up in getting into their new synagogue that the memory of the cramped frame house is fading fast.

He said, “If you ask anyone around here about the old house, they say, “What house?”