A Few Words about Klezm’Or’Ami’m

The name of our full group is Klezm’Or’Ami’m (which translates into “klezmer musicians from Congregation Or Ami, a dynamic sacred community grounded in Reform Judaism.” Hebrew is a remarkably concise language).  When we play private parties like weddings or bar mitzvahs we’re usually only three or four people, and then we’re “Klezm’Or’or’Less.”  The late Alan Smith founded the group around 1994 as a study group but we just couldn’t keep such a good thing to ourselves…

Klezmer is dance party music with a Jewish soul.  It started in Eastern Europe in the last century when small groups of wandering musicians – usually clarinetists, trumpet players and violinists – traveled from village to village, playing for both Jewish and non-Jewish events and audiences.  Klezmer arrived in America beginning in the early 1900’s and adopted a few of the customs of its new homeland, most notably, the piano. Klezmer went on to influence early jazz.  The opening of Gershwin’s “Rhapsody in Blue” is a straight klezmer riff for clarinet.  “When the Angels Sing” is based on a classical klezmer tune called “A Quiet Bulgur.”

The members of Klezm’Or’Ami’m include a Ph.D., a pediatrician, a pediatric cardiologist, an adult cardiologist, an association executive, two computer mavens, a hair stylist, a reluctant entrepreneur, an actor/director, a teacher, a grandfather, a native Yiddish speaker, a Holocaust survivor, a flute, a violin, two clarinetists, a trumpet player, a trombonist, a drummer, two keyboard players (one doubling on accordion), two vocalists and a manager — and we’re only eleven people! 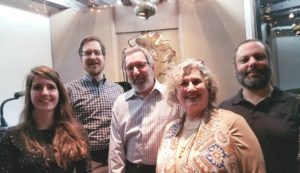